The change in price is expressed as a percentage of the average price - the average of the initial and new price, and the change in the quantity demanded is expressed as a percentage of the average quantity demanded - the average of the initial and new quantity. Using the average price and average quantity, the same elasticity value is obtained regardless of whether the price rises or falls. The measure is units-free because it is a ratio of two percentage changes and the percentages cancel each other out. Changing the units of measurement of price or quantity leave the elasticity value the same. Because a change in price causes the quantity demanded to change in the opposite direction, this ratio is always negative, although economists always ignore the sign and simply use the absolute value. It is the magnitude, or absolute value, of the measure that reveals how responsive the quantity change has been to a price change. Example 1 A Pizza Hut store can sell 50 pizzas per day at $7 each or 70 pizzas per day at $6 each. The price elasticity is: [(50 - 70)/60] / [(7 - 6) / 6.5] = -2.17. Own-Price Elasticity of Demand Demand can be inelastic, unit elastic, or elastic, and can range from zero to infinity. (Note: the negative sign is ignored.) Because elasticity is a relative concept, the elasticity of a straight-line demand curve will differ at each point along the demand curve. Specifically, a straight-line demand curve is more elastic when price is high. Note that the elasticity is not the slope of the demand curve. Elasticity is used since it is independent of the units of measure. Example 2 Refer to the graph below. Which of the following is true? 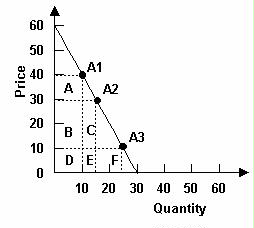 Thanks again for your wonderful site ... it definitely made the difference.