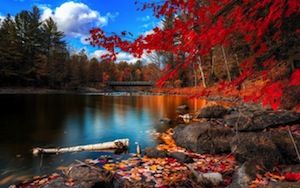 Pure discount instruments such as T-bills are quoted differently than U.S. government bonds. They are quoted on a bank discount basis rather than on a price basis:

Bank discount yield is not a meaningful measure of the return on investment because: Holding period yield (HPY) is the return earned by an investor if the money market instrument is held until maturity:

Since a pure discount instrument (e.g., a T-bill) makes no interest payment, its HPY is (P1 - P0)/P0. Note that HPY is computed on the basis of purchase price, not face value. It is not an annualized yield. The effective annual yield is the annualized HPY on the basis of a 365-day year. It incorporates the effect of compounding interest.

Money market yield (also known as CD equivalent yield) is the annualized HPY on the basis of a 360-day year using simple interest.

Based on money market yield: