Chart patterns signal to traders that the price of a security is likely to move in one direction or another when the pattern is complete. The difficulty in identifying chart patterns and their subsequent signals is that chart use is not an exact science. In fact, it's often viewed as more of an art than a science. While there is a general idea and components to every chart pattern, price movements do not necessarily correspond to the pattern suggested by the chart. This should not discourage potential users of charts; once the basics of charting are understood, the quality of chart patterns can be enhanced by looking at volume and secondary indicators. There are two types of charts. Reversal Patterns The head and shoulders pattern looks like a head with two shoulders. It is formed by a peak (shoulder), followed by a higher peak (head), and then another lower peak (shoulder). A "neckline" is drawn by connecting the lowest points of the two troughs. 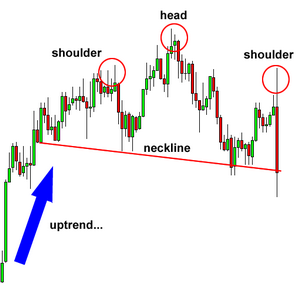 The pattern is considered to be a trend-reversal pattern, as the security heads down after the pattern's completion. Volume plays an important role in confirmation as the head and shoulders pattern unfolds. Ideally, but not always, volume during the advance of the left shoulder should be higher than during the advance of the head. This decrease in volume and the new high of the head together serve as a warning sign. The next warning sign comes when volume increases on the decline from the peak of the head. Final confirmation comes when volume further increases during the decline of the right shoulder. We can also calculate a target by measuring from the high point of the head to the neckline. This distance is approximately how far the price will move after it breaks the neckline: Price target = Neckline - (Head - Neckline) 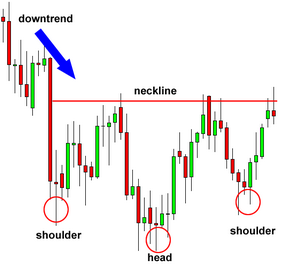 A double top pattern is created when a price movement tests resistance level twice and is unable to break through. The trend then reverses and the price heads down. 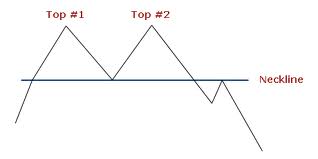 In the case of a double bottom, the price movement has tried to go lower twice but has found support each time. After the second bounce off of the support, the security enters a new trend and heads upward. Similarly, triple tops and triple bottoms can be formed. Continuation Patterns Continuation patterns indicate a pause in trend and indicate that the previous direction will resume after a period of time. The basic construct of the triangle pattern is the convergence of two trendlines - flat, ascending, or descending - with the price of the security moving between the two trendlines. There are three formations: The rectangle pattern is easily identifiable by two comparable highs and two comparable lows. The highs and lows can be connected to form two parallel lines that make up the top and bottom of a rectangle.

Rectangles represent a trading range that pits the bulls against the bears. As the price nears support, buyers step in and push the price higher. As the price nears resistance, bears take over and force the price lower. Finally, price will break out of the rectangle's range, either by moving through support or resistance. If the prior trend was an uptrend, the most likely direction will be up; if the prior trend was a downtrend, the most likely direction will be down. Flags and pennants are short-term continuation patterns that mark a small consolidation before the previous move resumes.

There is little difference between a pennant and a flag.

@Guest, while I am not a supporter of TA you should learn the importance of moderation of one's criticism if you are entering the financial industry.

This reminds me of people taking notes when playing baccarat in the casino...