A technical indicator is a series of data points derived by applying a formula to the price data of a security. It offers a different perspective from which to analyze the price action. Price-Based Indicators Price-based indicators incorporate information contained in market prices. A moving average is the average price of a security over a set amount of time. By plotting a security's average price, the price movement is smoothed out. Once the day-to-day fluctuations are removed, traders are better able to identify the true trend. Moving averages can be used to quickly identify whether a security is moving in an uptrend or a downtrend depending on the direction of the moving average. As you can see in the figure below, when a moving average is heading upward and the price is above it, the security is in an uptrend. Conversely, a downward-sloping moving average with the price below can be used to signal a downtrend. 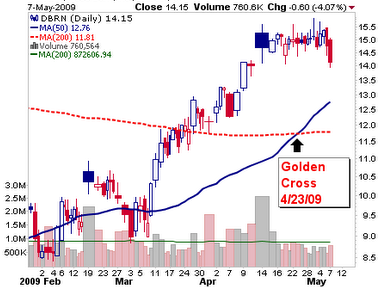 A dead cross shows the opposite movement of the moving average. Bollinger Bands are volatility bands placed above and below a moving average. Volatility is based on the standard deviation. The bands automatically widen when volatility increases and narrow when volatility decreases. Momentum Oscillators Generally speaking, momentum measures the rate of change of a security's price. As the price of a security rises, price momentum increases. The faster the security rises (the greater the period-over-period price change), the larger the increase in momentum. Once this rise begins to slow, momentum will also slow. As a security begins to trade flat, momentum starts to actually decline from previous high levels. Momentum oscillators can be used to determine the strength of a trend and to signal a pending trend reversal. A rate of change oscillator (ROC) or a momentum oscillator measures the percentage price change over a given time period. For example: 20 day ROC would measure the percentage price change over the last 20 days. The bigger the difference between the current price and the price 20 days ago, the higher the value of the ROC oscillator. A relative strength index (RSI) compares the average price change of the advancing periods with the average change of the declining periods. It is a momentum oscillator that measures the speed and change of price movements.

where RS = average gain / average loss RSI oscillates between zero and 100. Traditionally RSI is considered overbought when above 70 and oversold when below 30. The RSI should be used with other technical tools such as trend analysis or pattern analysis. A stochastic oscillator is a momentum indicator that shows the location of the close relative to the high-low range over a set number of periods.

Because the stochastic oscillator is range-bound, it is also useful for identifying overbought and oversold levels. It is above 50 when the close is in the upper half of the range and below 50 when the close is in the lower half. Low readings (below 20) indicate that price is near its low for the given time period. High readings (above 80) indicate that price is near its high for the given time period. When using the stochastic oscillator it is important to identify the bigger trend and trade in the direction of this trend. For example, securities can become overbought and remain overbought during a strong uptrend. Closing levels that are consistently near the top of the range indicate sustained buying pressure. The moving average convergence-divergence (MACD) turns two trend-following indicators, moving averages, into a momentum oscillator by subtracting the longer moving average from the shorter moving average. As a result, MACD offers the best of both worlds: trend-following and momentum. MACD fluctuates above and below the zero line as the moving averages converge, cross, and diverge. Sentiment Indicators Sentiment indicators attempt to gauge investor activity for signs of increasing bullishness or bearishness. They are used to quantify the levels of optimism or pessimism present in various markets. Opinion polls to gauge investors' sentiments towards the equity market are conducted by a variety of services. Contrarians believe that if a large proportion of investment advisory services have a bearish attitude, this signals the approach of a market trough and the onset of a bull market. Commonly used calculated statistical indices are: Flow-of-Funds Indicators Flow-of-funds indicators attempt to measure the ability or the financial position of different investor groups. These indicators try to measure their capacity of these groups to buy or sell stocks. They also attempt to measure where the money is going. Cycles Many technicians use various observed cycles to predict future movements in security prices. Kondratieff waves are described as regular, sinusoidal-like cycles in the modern (capitalist) world economy. Averaging fifty and ranging from approximately forty to sixty years in length, the cycles consist of alternating periods between high sectoral growth and periods of relatively slow growth. Real estate prices seem to follow an 18-year cycle, with a short recession at the mid-point of each cycle and a longer recession at the end-point. The decennial pattern is the pattern of average stock market returns broken down on the basis of the last digit in the year. The presidential cycle states that U.S. stock markets are the weakest in the year following the election of a new U.S. president. According to this theory, after the first year the market improves until the cycle begins again with the next presidential election.

I passed! I did not get a chance to tell you before the exam - but your site was excellent. I will definitely take it next year for Level II.