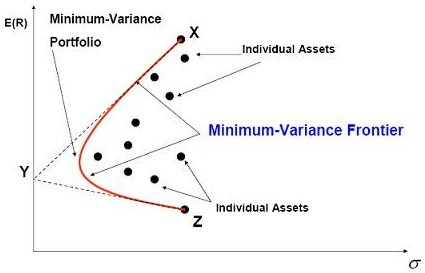 The outcome of risk-return combinations generated by portfolios of risky assets gives you the minimum variance for a given rate of return. Intuitively, any set of combinations formed by two risky assets with less than perfect correlation will lie inside the triangle XYZ and will be convex. Investors will never want to hold a portfolio below the minimum variance point. They will always get higher returns along the positively sloped part of the minimum-variance frontier. The efficient frontier is the set of mean-variance combinations from the minimum-variance frontier where for a given risk no other portfolio offers a higher expected return. 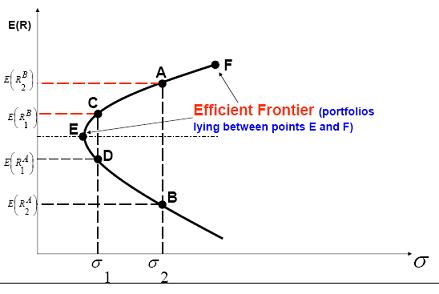 Correct Answer: I and III

Each portfolio along the efficient frontier has a different risk-return combination, and each could have appeal to a particular investor and her degree of risk aversion.

Which of the following statements regarding the efficient frontier are incorrect?

Stock A and B are perfectly negatively correlated. The standard deviation of A is 30% and that of B is 40%. If you construct a minimum risk portfolio with A and B, what is the proportion of stock A?Correct Answer: 57.14%

Set of portfolios that has the maximum rate of return for every given level of risk is called A. the Markowitz portfolio mix.
B. the efficient frontier.
C. the minimum-variance frontier.Correct Answer: B

A and B are efficient portfolios. Then, A. A combination of investments in A and B is necessarily an efficient investment.
B. If A has a higher expected return, it must have a lower risk.
C. A and B have the same risk-to-reward ratio.Correct Answer: A

Which of the following is (are) true?

I. A portfolio that lies above the efficient frontier is undervalued.
II. Efficient portfolios minimize variance for a given level of expected returns.
III. A zero beta portfolio is always efficient.
IV. A stock with zero correlation coefficient with a portfolio is not useful for further diversification.

Note that I is not possible. By definition, the efficient frontier minimizes variance for a given level of expected returns. III is not necessarily true and IV is patently wrong! A zero correlation is quite desirable. Indeed, the lower the correlation, the better its diversification capabilities.