Countries that attract a net inflow of foreign capital tend to run current account deficits. The U.S. is an example. In general, a trade deficit (surplus) has to be offset by a capital account surplus (deficit). That is, a current account deficit implies a capital account surplus.
X - M = (S - I ) + (T - G)
This relationship shows that a trade surplus is equal to the sum of public and private savings. A country saves more than enough to fund its investment (I) in plants and equipment. If a country runs a trade deficit, it has to rely on foreign capital to finance its investment (a capital surplus). Now we analyze the impact of the exchange rate on trade and capital flows. The Elasticities Approach This approach emphasizes price changes as a determinant of a country's balance of payments and exchange rate. The exchange rate is an important price in an economy. When a country's currency depreciates, domestic goods become relatively cheaper and foreign goods relatively more expensive in the global market. Hence, we would expect exports to rise and imports to decline. The elasticities approach considers the responsiveness of imports and exports to a change in the value of a country's currency.

For example, if import demand is highly elastic, a depreciation of the domestic currency will cause a disproportionate decline in the country's imports. The Marshall-Lerner condition states that a depreciation of domestic currency can improve a country's balance of payments only when the sum of the demand elasticity of exports and the demand elasticity of imports exceeds unity. The J-Curve is an observed phenomenon. 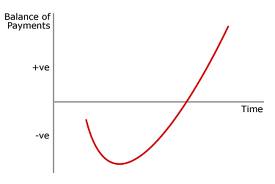 What is observed is that, following a depreciation or devaluation, a country's balance of payments worsens before it improves. This is because, in the short-run, exports and imports volume does not change that much, so that the price effect dominates, leading to a worsening of the current account. Absorption Approach This approach assumes that prices remain constant and emphasizes changes in real domestic income. Hence, the absorption approach is a real-income theory of the balance of payments. Absorption refers to the total goods and services taken off the market domestically. In other words, absorption equals the sum of consumption plus investment. Whether a currency depreciation can improve the current account (then the balance of payments) depends on its effect on national income and on domestic expenditure (absorption).

can someone tell me what is T, G and S in the the first formula

taxes, government spending, and savings. if you are asking this on the last section you should probably go back and start at the beginning...

@wassimes95 you cant start studying halfway, please go through the first topics til lasts and keep ethics for last.