An indifference curve shows the combination of two products that provide an individual with a given level of utility (satisfaction). It is a curve, convex from below, that separates the consumption bundles that are more preferred by an individual from those that are less preferred. The points on the curve represent combinations of goods that are equally preferred by the individual. For example, the bundle at point A of 10 apples and 3 fish provides the same satisfaction as the bundle at point B of 6 apples and 5 fish.

Indifference curves provide a diagrammatic picture of how an individual ranks alternative consumption bundles. If two consumers have different marginal rates of substitution, they can both benefit from the voluntary exchange of one good for the other.

The slope of an indifference curve is always negative. This characteristic comes from ______. A. the axiom of completeness
B. the axiom of transitivity
C. the axiom of nonsatiationCorrect Answer: C That is, "the more, the better" applies to comparing different baskets of commodities. If we randomly spot a certain point on the diagram representing two goods, we will see that any combinations of these two goods that lie in the northeast of this point are better; symmetrically, any combinations lying in the southwest of this point are less desired. So, if we connect all dots representing the same level of utility as point A and form a curve, the curve should go from northwest to southeast.

The following figure shows Bobby's indifference map for juice and snacks. Also shown are three budget lines resulting from different prices for snacks, assuming he has $20 to spend on these goods. Which of the following points are on Bobby's price-consumption curve? 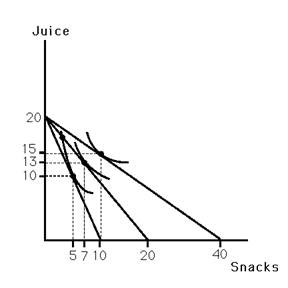 The amount of one good that is just sufficient to compensate the consumer for the loss of some amount of another good is called ______. A. the marginal rate of substitution
B. consumer surplus
C. the substitution effectCorrect Answer: A

The marginal rate of substitution is the slope of the indifference curve and represents the amount of good x that the consumer must be compensated with in order to reduce his or her consumption of good y by one unit.

Evaluate the following statements: I. All points that lie above (to the northeast of) an indifference curve represent consumption bundles preferred to those represented by all points on that curve.
II. The indifference curves of a rational decision-maker cannot cross. A. Both statements are true.
B. I is false; II is true.
C. I is true; II is false.Correct Answer: A

Indifference curves are always convex from below, not concave. The other characteristics assure us that all bundles of goods can be compared, that a bundle with less is not viewed indifferently when compared to a bundle with more, and that goods are substitutable at a decreasing rate.

An indifference curve is a curve that shows combinations of goods to which an individual is indifferent. That is, total utility remains constant.