Let's illustrate the impact of a tariff on automobiles. Without a tariff, the world market price (Pw) would prevail in the domestic market. U.S. consumers purchase Q1 units while U.S. producers supply Qd1 units. When the U.S. imposes a tariff (t) on imports of automobiles, U.S. consumers now pay (Pw + t) to purchase automobiles from foreigners. Due to the higher price, U.S. consumers will reduce demand from Q1 to Q2, while U.S. producers will increase supply from Qd1 to Qd2. Imports from foreigners will reduce from Q2 to Qd2.

The tariff harms domestic consumers as they have to pay a higher price for fewer goods. They lose the area S + U + T + V. Note that areas U and V are a deadweight loss (loss of efficiency) for the economy since they do not benefit either producers or the government. In effect, a tarrif acts as a subsidy to domestic producers. Potential gains from specialization and trade go unrealized. Quotas An import quota is a specific limit or maximum quantity (or value) of a good permitted to be imported into a country during a given period. It is designed to restrict foreign goods and protect domestic industries.

Assume that a quota limits imports of automobiles to (Q2 - Qd2), a quantity below the free trade level of imports (Q1 - Qd1). Since the quota reduces foreign supply, domestic price will be pushed up to P2. Due to the higher price, U.S. consumers will reduce demand from Q1 to Q2, while U.S. producers will increase supply from Qd1 to Qd2. Like a tariff, an import quota benefits domestic producers but harms domestic consumers. However, different from a tariff, an import quota benefits foreign producers at the expense of the government; with a quota, foreign producers who are granted permission to sell in the domestic market can charge premium prices for the limited supply of foreign goods. The area T represents the gains of those foreign producers. Under a tariff, the government would gain the area T in the form of tariff revenues. This politically granted privilege creates a strong incentive for foreign producers to engage in rent-seeking activities. In addition, with a quota foreign producers are prohibited from selling additional units regardless of how much lower their costs are relative to those of domestic producers. Therefore, quotas are more harmful than tariffs in many ways. A voluntary export restraint (VER) is an agreement between two governments in which the government of the exporting country agrees to restrain the volume of its own exports. Foreign firms and governments will sometimes agree to limit their exports to a country to avoid the imposition of other types of trade barriers. The economic impact of a VER is similar to that of a quota. The main difference: Export Subsidies An export subsidy is a government policy to encourage export of goods and discourage sale of goods in the domestic market. The subsidy ends up costing the government instead of generating revenue. Also, unlike an import tariff, an export subsidy increases the amounts traded. The distortion of production, consumption, and trade decisions generates a welfare loss. This welfare loss is greater for a large country because increased production and export of the subsidized product reduces its global price - that is, it worsens the country's terms of trade. Example 1 Refer to the graph below. What tariff would the government have to impose on tomatoes imported from Mexico to have the same effect as a quota of Q1? 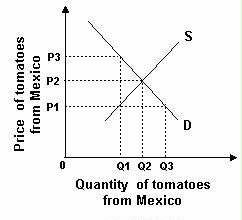 A tariff that shifts supply to where it intersects demand at P3 and Q1 would be the equivalent of a quota of Q1. This would happen with a tariff of P3-P1. Example 2 Refer to the graph below. If this graph represents the supply of and demand for an imported product, a tariff of t will result in revenue for the government, shown by area ______. 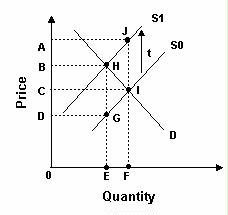 A tariff of t shifts the supply curve up from S0 to S1. Quantity sold is now OE. Tariff revenue is t times quantity OE, shown by the rectangle BDGH. Example 3 Refer to the graph below. With a quota of 600 tons on lumber imported from Canada, the revenue the government would collect from the import of lumber would be: 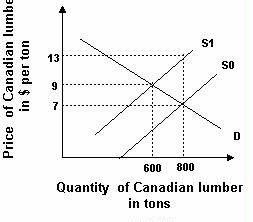 Answer: The government does not collect revenue with a quota. Example 4 Refer to the graph below. Demand and supply are initially D and S1, respectively. Which of the following best describes the effect of a $.50 per pound tariff on Danish hams imported into the United States? 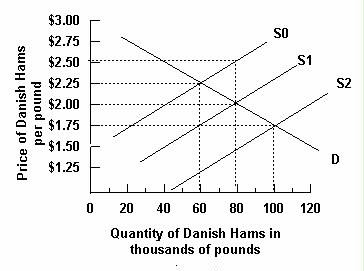 Answer: A tariff shifts the supply curve to the left by the amount of the tax. Equilibrium price is determined where quantity demanded equals quantity supplied, at $2.25 per pound and 60 thousand pounds. Trading Blocs, Common Markets, and Economic Unions A regional trading bloc is an intergovernmental association that manages and promotes trade activities among countries. Depending on the level of integration there are different types of regional trading blocs. Regional integration can be viewed as a movement toward freer trade. There are always many benefits of free trade. However, regional integration can lead to changes in the patterns of trade and impose costs on some groups. For example, two static effects can occur as results of a customs union. The net welfare effect can be either negative or positive. There are other challenges in the formation of an RTA, such as cultural differences, historical considerations, national sovereignty, etc. Capital Restrictions Trade in assets (capital flows) provides substantial economic benefits by enabling residents of different countries to capitalize on their differences. Capital flows enable countries to borrow in order to improve their ability to produce goods and services in the future. Other benefits include the technology transfer that often accompanies foreign investment and the greater competition in domestic markets that results from permitting foreign firms to invest locally. The benefits of capital flows do not come without a price, however. Because capital flows can complicate economic policy or even be a source of instability themselves, governments have used capital restrictions to limit their effects. Capital restrictions are designed to limit or redirect capital account transactions. Countries use capital restrictions to maintain balance of payments, control exchange rate, preserve domestic savings for domestic use, and protect infant industry. Capital restrictions include prohibitions on investment by foreigners, taxes on the income earned on foreign investments by domestic citizens, quantity restrictions on capital flows, and prohibition of foreign investment in certain domestic industries. As capital restrictions are often used in conjunction with other policy instruments, their effectiveness often has mixed results.

I am using your study notes and I know of at least 5 other friends of mine who used it and passed the exam last Dec. Keep up your great work!