In investment analysis, it is often impossible to study every member of a population. Even if analysts could examine an entire population, it may not be economically efficient to do so. Sampling is the process of obtaining a sample.

A simple random sample is a sample obtained in such a way that each element of a population has an equal probability of being selected. The selection of any one element has no impact on the chance of selecting another element. A sample is random if the method for obtaining the sample meets the criterion of randomness (each element having an equal chance at each draw). "Simple" indicates that this process is not difficult, and "random" indicates that you don't know in advance which observations will be selected in the sample. The actual composition of the sample itself does not determine whether or not it's a random sample. Example Suppose that a company has 30 directors, and you wish to choose 10 of them to serve on a committee. You could place the names of the 30 directors on separate pieces of paper and draw them out one by one until you have drawn a sample of 10. Note that the conditions for simple random sampling have been satisfied in that every one of the 30 directors has an equal (non-zero) chance of being selected in the sample. In this example, it makes no sense to sample with replacement, as this would mean that once you have drawn a name, that name goes back into the hat (it is replaced), and can be drawn again. If the same person's name is drawn more than once, you won't end up with a sample size 10 if you draw 10 names; this experiment should therefore be done without replacement.

The sample taken from a population is used to infer conclusions about that population. However, it's unlikely that the sample statistic would be identical to the population parameter. Suppose there is a class of 100 students and a sample of 10 from that class is chosen. If, by chance, most of the brightest students are selected in this sample, the sample will provide a misguided idea of what the population looks like (because the sample mean x-bar will be much higher than the population mean in this case). Equally, a sample comprising mainly weaker students could be chosen, and then the opposite applicable characteristics would apply. The ideal is to have a sample which comprises a few bright students, a few weaker students, and mainly average students, as this selection will give a good idea of the composition of the population. However, because which items go into the sample cannot be controlled, you are dependent to some degree on chance as to whether the results are favorable (indicative of the population) or not. Sampling error (also called error of estimation) is the difference between the observed value of a statistic and the quantity it is intended to estimate. For example, sampling error of the mean equals sample mean minus population mean. Sampling error can apply to statistics such as the mean, the variance, the standard deviation, or any other values that can be obtained from the sample. The sampling error varies from sample to sample. A good estimator is one whose sample error distribution is highly concentrated about the population parameter value. Sampling error of the mean would be: Sample mean - population mean = x-bar - μ.
Sampling error of the standard deviation would be: Sample standard deviation - population standard deviation = s - σ. Note that sampling error is not a bias. A biased sample is one in which the method used to create the sample results in samples that are systematically different from the population. For instance, consider a research project on attitudes toward sex. Collecting the data by publishing a questionnaire in a magazine and asking people to fill it out and send it in would produce a biased sample. People interested enough to spend their time and energy filling out and sending in the questionnaire are likely to have different attitudes toward sex than those not taking the time to fill out the questionnaire. It is important to realize that it is the method used to create the sample, not the actual makeup of the sample, that defines the bias. A random sample that is very different from the population is not biased: it is by definition not systematically different from the population. It is randomly different.

In stratified random sampling, the population is subdivided into subpopulations (strata) based on one or more classification criteria. Simple random samples are then drawn from each stratum (the sizes of the samples are proportional to the relative size of each stratum in the population). These samples are then pooled. It is important to note that the size of the data in each stratum does not have to be the same or even similar, and frequently isn't. Stratified random sampling guarantees that population subdivisions of interest are represented in the sample. The estimates of parameters produced from stratified sampling have greater precision (i.e., smaller variance or dispersion) than estimates obtained from simple random sampling. For example, investors may want to fully duplicate a bond index by owning all the bonds in the index in proportion to their market value weights. This is known as pure bond indexing. However, it's difficult and costly to implement because a bond index typically consists of thousands of issues. If simple sampling is used, the sample selected may not accurately reflect the risk factors of the index. Stratified random sampling can be used to replicate the bond index. A stratified sample will ensure that at least one issue in each cell is included in the sample.

Cluster sampling is a process of dividing a population into multiple groups/clusters. The clusters must be representative of the total population. A simple random sample of the cluster is chosen and the elements in each of these clusters are then sampled. There are single-stage, two-stage, or multiple-stage sampling methods in cluster sampling. These methods depend upon the number of steps required to create the desired sample. 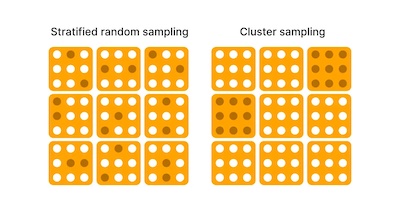 Cluster sampling is advantageous when a large population is in need of a survey because it is less costly.

a. compare and contrast probability samples with non-probability samples and discuss applications of each to an investment problem; b. explain sampling error; c. compare and contrast simple random, stratified random, cluster, convenience, and judgmental sampling;CFA® 2022 Level I Curriculum, Volume 1, Module 5
LOS Quiz
Subject marked as complete.
Subject marked as incomplete.
Subject bookmarked for review later on your dashboard.
Bookmark removed from your dashboard.

I am using your study notes and I know of at least 5 other friends of mine who used it and passed the exam last Dec. Keep up your great work!