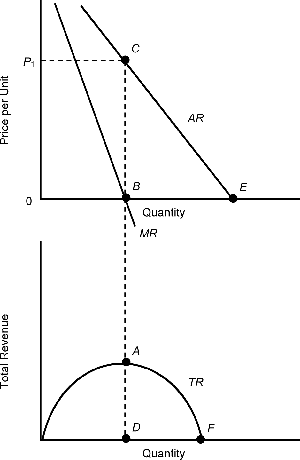 Over the output range with increasing marginal returns, marginal cost falls as output increases. Once a firm confronts diminishing returns, larger and larger additions of the variable factor are required to expand output by one unit. This will cause marginal cost (MC) to rise. As MC continues to increase, eventually it will exceed average total cost. Until that point, MC is below ATC (per unit cost), bringing ATC down. When MC is greater than ATC, the additional units cost more than the average, and ATC must increase. A U-shaped short-run average total cost curve results. The vertical distance between the AVC and ATC curves measures AFC. The vertical distance between the AVC and ATC curves gets smaller as output increases because AFC decrease as output expands. Profit Maximization Maximum economic profit requires that (1) marginal revenue (MR) equals marginal cost (MC) and (2) MC not be falling with output.

Rem: Var cost increase shifts all cost curves, Fixed cose incr. doesn't affect the MC curve since there is no 'per unit' cost of add'l FC.

I dont agree with achu that if VC increases FC necessarily increases. I think it is as in the notes,

^because the price change effects all goods sold, not just the addition unit.

can someone explain (2) MC not falling with output???

for profit maximization a firm should operate at the level of output for which MR=MC, provided MC is not falling at that level.

so basically u have to reduce MC to the point in which it cant be reduced anymore and equals to MR.