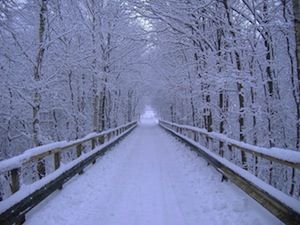 The equilibrium price set by the market mechanism is often deemed to be unfair: buyers complain that the price is too high, while sellers believe that it is too low. In such cases, the government may regulate the price of the good or service. This is known as price control. A price control is a government-mandated price that may either be greater or less than the market equilibrium price. Price ceilings and floors are two types of price controls. A Price Ceiling A price ceiling is a legal restriction that prohibits exchanges at prices greater than a designated price: the ceiling price. Price ceilings are usually imposed when the equilibrium price is considered too high to be fair. A typical price ceiling results in a lower price than market forces would produce. A shortage will result in a situation in which the quantity demanded by consumers exceeds the quantity supplied by producers at the existing price. A typical example of a price ceiling is a "rent ceiling," implemented by over 200 U.S. cities. If the rent ceiling is set above the equilibrium rent, it has no effect. The market works as if there were no ceiling. But if the rent ceiling is set below the equilibrium rent, it has powerful effects.

If a rent ceiling is set below the equilibrium price P0, for example, at P1, there is a reduction in the quantity that producers are willing to supply qs and an increase in the quantity that consumers demand qd relative to the original equilibrium quantity q. Because the legal price cannot eliminate the shortage, other mechanisms operate. For example, a black market is an illegal market that operates alongside a legal market in which a price ceiling or other restriction has been imposed. A shortage of housing creates a black market in housing. Illegal arrangements are made between renters and landlords at rents above the rent ceiling - and generally above what the rent would have been in an unregulated market. A rent ceiling leads to an inefficient use of resources. The quantity of rental housing is less than the efficient quantity and there is a deadweight loss. 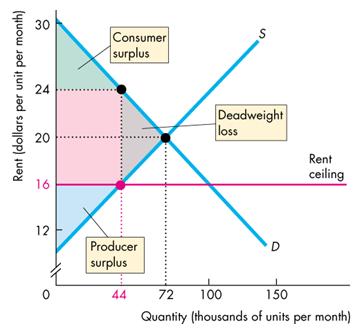 A rent ceiling decreases the quantity of rental housing, shrinks the total producer and consumer surplus by using resources such as search activity, and creates a deadweight loss. It also transfers part of the producer surplus from producers to consumers. The consumer surplus becomes the green area + the pink area. A Price Floor A price floor is a minimum price that can be legally charged. It usually fixes the price of a good or resource above the market equilibrium level. Price floors are usually imposed when the equilibrium price is considered too low to be fair. Agricultural price supports and minimum wage legislation are examples of price floors.

If a price floor is set above the equilibrium price, p0, for example, at p1, there is a reduction in quantity demanded from q0 to qd, whilst the quantity supplied increases from q0 to qs. The result is a surplus of qs-qd. Example 1 Refer to the graph below. A price floor set by the government would be binding and cause the greatest distortion in the market if it were established at what price? 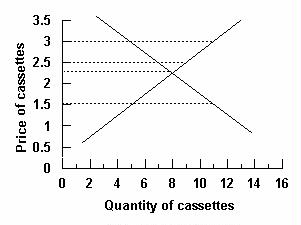 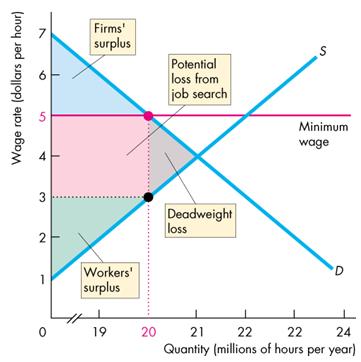 Note that a surplus does not mean the good is no longer scarce: people just desire less of the good at the current price than sellers desire to bring to the market. A decline in price would eliminate the surplus but not the scarcity of the item. Taxes When a tax is imposed, the government can make either the buyer or the seller legally responsible for payment of the tax. However, the person who writes the check to the government is not necessarily the one who bears the tax burden. Example 2 The following graph illustrates how a $1,000 tax placed on the sale of used cars would affect the market. Assumption: all used cars are identical.

The effects of a tax depend on the responsiveness of buyers and of sellers to a change in price. It tends to fall more heavily on whichever side of the market has the least attractive options elsewhere and thus is less sensitive to price changes. This is because an inelastic curve indicates there are few substitutes available. In practice, taxes usually are levied on goods and services with an inelastic demand or an inelastic supply. Alcohol, tobacco, and gasoline have inelastic demand, so the buyers of these items pay most of the tax on them. Labor has a low elasticity of supply, so the seller - the worker - pays most of the income tax and most of the Social Security tax.

A price floor causes excess demand, resulting in the need to ration by some means other than price. True or False?Correct Answer: False

If a new excise tax of $3.00 per gallon of gasoline sold is imposed on sellers of gasoline, ______ I. sellers will bear the full burden of the tax.
II. gasoline will rise in price by $3.00.
III. the statuary incidence and actual incidence of the tax will be the same.Correct Answer: None of these answers are correct. The tax will raise the supply curve by $3.00 but the price will increase by a smaller amount because the quantity demanded shrinks as the price rises. The statutory incidence of the tax is entirely on the sellers but the actual incidence is shared by buyers and sellers. The tax will be absorbed in part by buyers and in part by sellers. 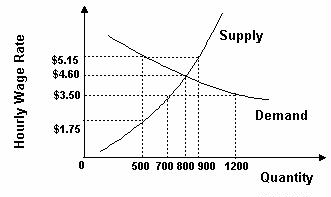 Rent controls can be expected to have the following result(s): I. More housing will be constructed than would otherwise be.
II. Owners of existing housing units will be anxious to fix up their units.
III. Renters with long-term leases will benefit at the expense of newcomers.
IV. Everyone, both renters and owners, will be happy.Correct Answer: III

Assume that unskilled workers, on average, are worth $5 per hour to employers, but that Congress enacts a minimum wage law that requires employers to pay $6 per hour. This law will cause which of the following results? I. There will be a shortage of unskilled labor.
II. There will be a surplus of unskilled labor.
III. All unskilled persons will benefit from the $6 minimum wage law.
IV. Business costs will decrease and employers will lower the prices of goods and services sold in product markets.Correct Answer: II

Which of the following is NOT a true statement about rent control? A. In the long run, as demand increases, apartment shortages are likely to become more severe and the quality of rent-controlled apartments is likely to decline.
B. Consumers will have to spend more time searching for apartments if there are rent controls.
C. The only people who benefit from rent controls are the poor.Correct Answer: C

Low apartment prices give landlords little incentive to maintain quality, and likewise, apartments will become even scarcer as demand increases. Any time there is a shortage, consumers will "pay" a higher price in terms of time searching. While some of the poor are likely to benefit from rent control, anyone who gets such an apartment gains, and some of those people may not be poor. Additionally, if there is "key money" or other bribery, other parties, such as apartment owners, may gain.

If a legislature decides to reduce poverty by passing a law requiring that employers pay higher wages, economic theory and historical experience suggest that ______ I. unemployment for low-skilled employees will increase.
II. a market surplus of low-skilled labor will develop.
III. employers will offer less job training to low-skilled employees. A. I and II
B. I and III
C. I, II and IIICorrect Answer: C

A legislated minimum wage will put the wage rate above the market clearing level and will result in a surplus of low-skilled labor. This surplus labor is unemployed. To cut costs, employers will cut non-wage benefits to employees (such as job training).

An effective price floor will set the price above the equilibrium price. At such a price, quantity supplied will exceed quantity demand. This is the definition of a surplus.

To be effective, a price floor must be above the market price. As, in this case, the legal minimum price is below the equilibrium price, it will have no effect on the market.

When demand is inelastic, sellers will be able to shift a larger share of the tax on to buyers.

When demand is relatively elastic compared to supply, sellers will bear the larger share of the tax burden.

An alternative to making a good or service illegal that would have the same effect on price and quantity traded is a ______. A. price ceiling
B. tax
C. price floorCorrect Answer: B

When rent controls limit rents to prices below equilibrium prices, which of the following is most likely to occur? A. New housing construction expands.
B. Long-time tenants extract significant benefit from landlords.
C. Newcomers are given preferential entry into rent-controlled apartments.Correct Answer: B

Rent ceilings reduce construction and create a housing shortage. They lower rents for some but raise them for others. Long-time renters are winners but mobile newcomers are losers.